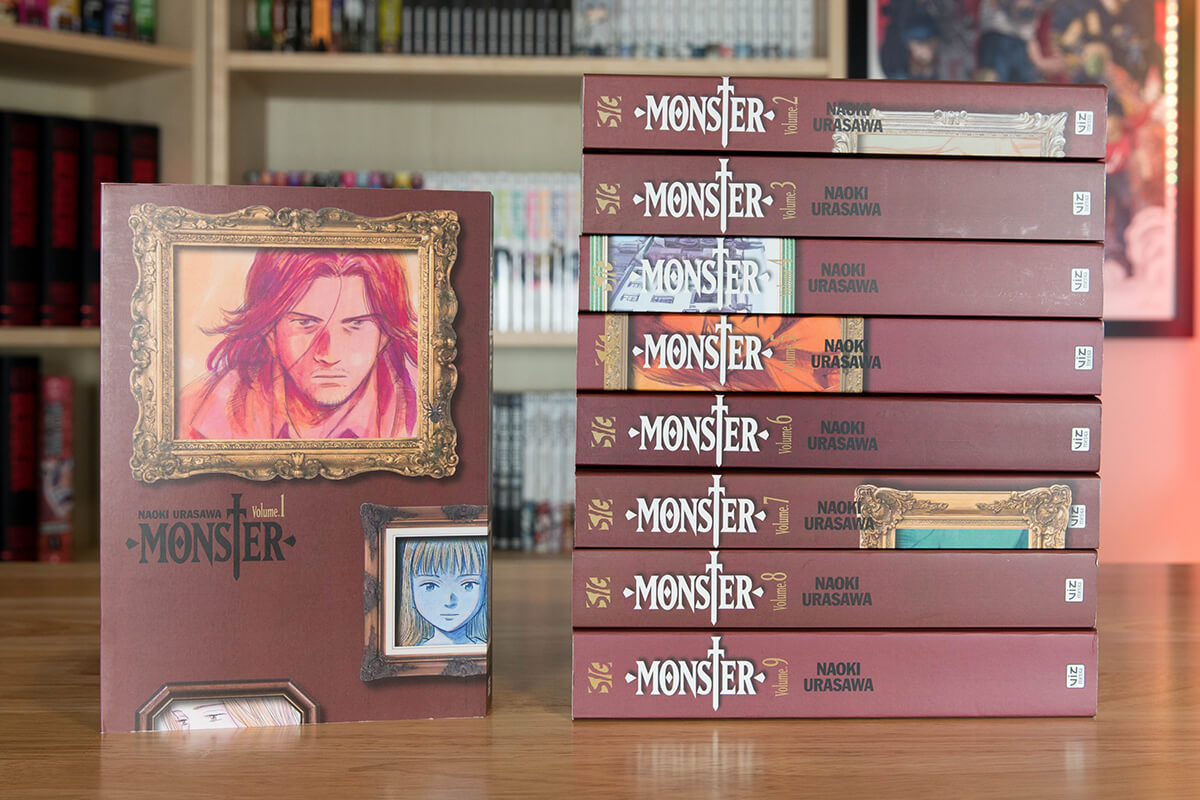 Monster by Naoki Urasawa, the creator of a number of other manga series like 20th Century Boys and Pluto—two of my favorite sci-fi manga of all time—is an incredible psychological thriller that features a game of cat and mouse between a neurosurgeon Dr. Kenzo Tenma and a true monster, but it's also very much a story about people coming together to right wrongs, overcoming one's inner demons, and how our choices, whether big or small, can have consequences far beyond anything we could ever imagine. Dr. Tenma made a choice to save someone, and because he did so, a monster lived on.

Framed for murder by the one he saved, Dr. Tenma must evade the authorities all the while searching for answers to clear his name and uncovering the true identity and origin of the monster he operated on. Naoki Urasawa is well-known for creating stories that are full of mystery and suspense, but he also is a master at weaving together different timelines.

The past influences the future, moments in time shape people, one event leads to another, etc. Cause and effect is something he explores well in all of his manga, and this is present in Monster as well. You see how these characters change in real time, but flashbacks are peppered throughout the series that offer insight into why they are the way they are today. These seemingly separate events that are spread across a number of different timelines all come together like pieces of a puzzle to create the larger picture.

I got the sense that he really did his research while preparing for and writing Monster; Everything from the politics, to the settings, to the people that existed in this story and the struggles they faced felt real as a result of his attention-to-detail and the thought and effort he put into the setup of the story.

Naoki Urasawa tells his stories at a leisurely yet compelling pace. He guides you, but he also doesn't spoon-feed you everything you need to know along the way. Because of this, you become increasingly invested in his stories. In Monster, you are given bits of information to keep you intrigued, but he still leaves you guessing until the very end.

I will say that the first few volumes of Monster were somewhat slow for me. I wanted to mention this for those of you who may get into the series and wonder if it will ever pick up. Naoki Urasawa is one of those authors I've learned to stick with through lulls, because the development of and reveals in his stories are well-worth the wait, and oftentimes, the true meaning of his stories don't hit you until the final volumes or the final chapters.

His manga are also very much a story about people. Each character is given a rich backstory, whether they hold roles big or small. Although, one could argue that no character in Naoki Urasawa's stories have small roles, because they each affect the people as well as the plot points in his stories in their own ways.

Of course, we do have our main protagonist Dr. Tenma and our main antagonist. They are the main faces and driving forces of this story. Everything ultimately centers around their showdown with one another, but they aren't always the center of attention, and this is something I really appreciate about Monster. Their actions affect other people, whether positive or negative, and you see this firsthand.

The complex and starkly different personalities of our two main characters is also a big reason as to why Monster is such a big success. On one hand, you have a kind-natured doctor, who would do anything to save a life and genuinely wants to help others, and then you have an intelligent and deranged young man who thinks of people as a means to an end, and uses them without a thought for his own personal endeavors and goals to bring about violence, chaos, and havoc everywhere he goes.

Along with the overarching storyline, there are a number of different storylines and issues that are explored in Monster from discrimination to the after effects of war and conflict between regions. All of the individuals in this story are battling with monsters of their own, whether it be addiction, the loss of a loved one, etc. Parenting as well as child development are two topics that are explored a lot in the series, so it takes a look at many different issues and offers many insights and life lessons that make it a profound as well as emotional read.

You also have characters who have similar traumas, but deal with them in different ways. This shows how the interactions that one has throughout life and the people they meet, or reach out to them, can affect positive change. If one person would have said or done something differently, then perhaps, their future wouldn't have turned out the way it did, and it's through these characters, that we see this in effect. But it also explores how sometimes it's just too late; The damage is done and there's nothing we can do to get through to someone.

It would be simple to just say that a monster is a monster, but Monster dives deeper into more philosophical questions and takes a look at the psychological aspects that create them. What makes a person turn into a monster, but more specifically, who's the true monster in this story? The monster themselves or the people who created them? We get a glimpse into the psychology of a sociopath in Monster, while others stories just showcase the horrible things they've done. They take a look at the how, but not the why, and it's the why that's the most intriguing of all.

It's one of the greatest mystery as well as psychological manga to ever release, but it's also one of the best manga by Naoki Urasawa. You can currently collect Monster via the Perfect Editions releasing by Viz and you can shop the series now at one of the trusted manga retailers below!

In other manga news, check out all of the new manga that are releasing in 2023!